Our Lady of Kazan Icon 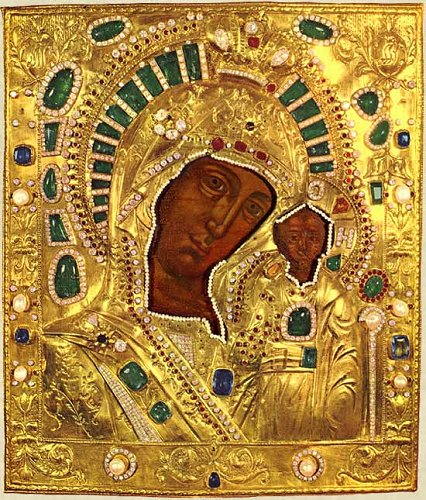 This image was taken by Karl Patzel, S.J in the early 1970’s of the miracle-working Kazanskaya icon which Fr. Andrei Urosov, our founding pastor, had rescued from the hands of a private collector in the mid-sixties. Fr. Karl raised more than one million dollars to purchase the miraculous icon.

For ten years, the miraculous Kazanskaya was held and venerated at Our Lady of Fatima Byzantine Catholic Church in San Francisco, California. In the late 70’s the Roman Catholic bishop of San Francisco ordered that ownership of the icon be transferred to the Blue Army, a Roman Catholic organization. From the Blue Army the icon made its way to the Vatican where from more than a decade it stood in the private chapel of our Holy Father, John Paull II.

The Our Lady of Kazan icon was returned to the Moscow Patriarchate in 2004.